Guy from POG 2+2 causing trouble for me 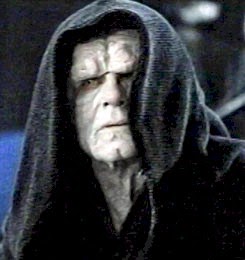 There's this guy on POG 2+2 called Gabethebabe who uses a profile pic of Emperor Palpatine from Star Wars. He had joined the Fortified Tower game on FoL when I advertised it. The only person to do so from either POG 2+2 or 17th Shard. I had been grateful, though a little concerned since I'd seen him involved in an argument about his usage of an H. P. Lovecraft mod account for his Cthulhu minimash.

He had also signed up for the Dixit game I was planning to host on POG 2+2. I had started the signups before the lockdown in Taiwan got serious and ended up needing to delay the game. I didn't want to start the actual game if I was still uncertain about my schedule and couldn't guarantee time to consistently host it.

Apparently Gabe didn't like that I was continuing to post on FoL for the Fortified Tower game and yet didn't start the Dixit game. I'm not sure if he's just not understanding that there's a difference between posting as a player for a game or posting other social comments and actually planning out time for hosting a game. He's hosted games on POG 2+2, so I would think he'd realize this. Also a bit creepy that he's commenting in the Dixit signup thread about my FoL posting and then also commenting in the Fortified Tower game about the Dixit game.

Hopefully he'll understand better after my explanation. Perhaps I should have been more specific in my earlier post that I intentionally didn't want to start the Dixit game up if I couldn't be sure about consistent time to host it. I also wonder if he somehow assumes that someone being in lockdown means they have more time for things like that. Definitely not the case for me. 🙂

Grrr, part of me thinks I should be more angry about this. It was inappropriate for Gabe to post about this in the Fortified Tower game. I don't know if he was trying to embarrass me on my home site in front of my friends. But another part of me says to be patient and stoic about this. Perhaps he was just making small talk and didn't realize the inappropriateness of it. Or perhaps he did have those negative intentions, but he'll change his attitude after my explanation. So I guess I'll wait and see.

I often have this problem with determining when a situation calls for a stronger response or patient understanding or even no response at all. There are people who tell me that I shouldn't be a pushover and that I have to stand up for myself. But then those people tend to be belligerent and I don't necessarily think their approach is good. 🙂 However, I do think there are definitely times when you have to show you won't be pushed around. And it's possible to use the "patient understanding" stance as a way to avoid confrontation. That's not good.

When I think to an extreme, though, I think it is better to err on the side of patient understanding than anger. If a person ever gains any sort of power, it is important to live this way. Again I go back to thinking about Marcus Aurelius for inspiration.