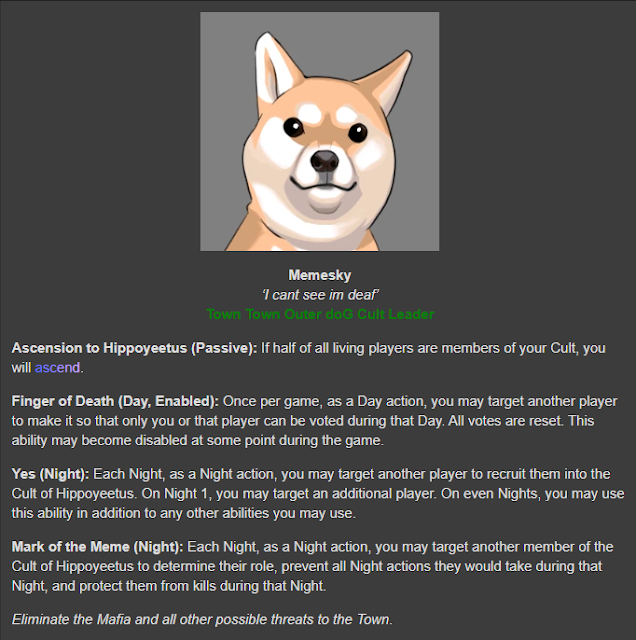 It's N0 for the Community FM 3 game at FoL. I randed Memsky, who I eventually figured out was a player from before my time there. This was the special card that Hippo asked to swap for his own rolecard.

This looks like it could be a fun role. I'll have to be careful to stay alive until at least D3. I'm going to recruit at least Hippo N1 since it's only fair for him to be in this cult. 🙂 I'm thinking of also recruiting WindwardAway as the 2nd allowed for N1. She's someone who I think would be good to rolecop.

I'm getting somewhat nervous as the time for the game to start approaches. It's going to start right before my bedtime. I think I won't even bother staying up late for it D1. Going to be a lot of chatting back and forth. And since there are no ITAs for D1, then nothing too exciting should happen. I'm just wondering if anyone is going to mention me not speaking up yet. People seem to forget time zones.

I'm wondering how much I should try to think hard about what I've learned. There are going to be so many players at the beginning. I think I saw someone mention how it's good to just focus on a few slots to start with. I think I'll be doing that.