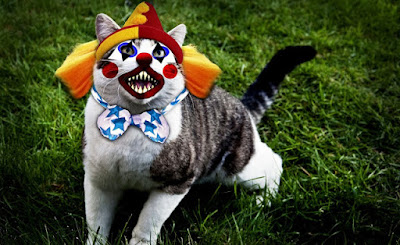 NOTE: This post was written 2/3/2021 but saved for publication after the game finished.

It's the exploration phase of chapter 4 in the Your Turn To Die game at Forum of Lies. Sorry that I didn't post some earlier stuff. I think there was something I did want to post about, but I forget at the moment. The reason I'm posting now is that I just got done going crazy in the game. Haha. 😀

They were discussing needing someone to die to proceed with a plan of some sort. Not sure exactly what it was. But I volunteered since I've been feeling like I can't do much more to help and I know I'll be busy yet this week and next week.

Anyway, because of my impending death, I guess I started just feeling crazy and did crazy stuff in the game thread. Haha. 😀 I was having my character call them all bastards for wanting me dead and saying I would haunt them. Trochi found it strange and funny to hear me the word bastard and acting this way. I had my character put on the creepy clown outfit she got for this chapter with the sinister character swaps.

Arctic also had everyone touch him for some plan of his, and I exclaimed that I was infected. He quickly denied it, but I followed up with saying I was infected with joy. 😀 I then proceeded to say more crazy stuff and had people wondering if Kat hacked my account and took over. Haha. 😀 Oh, that's when I posted the creepy cat clown pic above. It was certainly a fun time to just let go. 😀