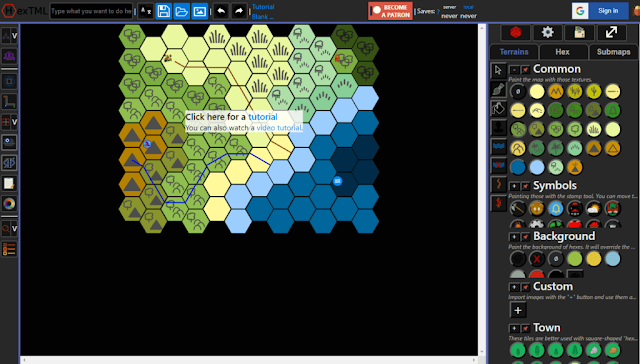 Originally I was just going to talk about this in a Bullet Journal post, but it's gotten to be a lot and probably deserves it's own post. Anyway, I spent much of today designing my game idea for Forum Battle Royale. I already submitted the game into the Misc queue a Forum of Lies. Here's the description I gave it.

Battle royale on a hex-tiled map with simultaneous turns. Players submit actions for attacks and moves, then turns are processed at the same time. All players on the same hex join a private thread together to taunt each other or make deals. But in the end, there can be only one!

I did want the first game to happen at FoL for historical purposes in case this becomes popular. Haha, maybe I'm thinking too far ahead. 😃 But it might be a long wait in the Misc queue. I'm tempted to start a game at POG 2+2 since then it could start sooner. I do want to try it out in a basic form.

I may add a page on this blog for the game rules and other stuff like maps. Oh, I am so inspired by this. I think it could be really cool. 😃 There's so much that could be done to expand on the idea in future games. And then even themes that could be applied to it, like space or Mistborn or anything! 😃

I found a really cool tool for making the maps. I searched around and tried out a few map makers, but settled on Hextml. It allows for random tiled maps that can then be edited. I can even use custom images for tiles. I had also tried out Inkarnate. That one is really cool and makes beautiful maps, but I couldn't find a way to generate a random map to start with. Plus it might be a little too much for what's actually needed.