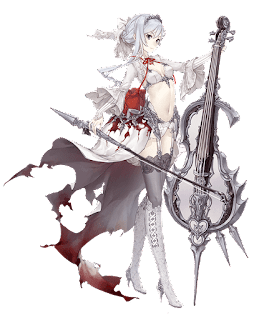 A friend had mentioned an upcoming game called SINoALICE. There's actually a Japanese version already, but the global English version is getting released soon. I liked the interesting storyline and characters, so I was planning to try it out.
I had researched a bit about game information and joined a couple Discord servers. One of the Discord servers turned out to be a group of players planning to join the global version as a guild. I hadn't even realized there were guilds in the game. And apparently there's a PvP component to it. There's a regular guild vs. guild event called the Colosseum. This made me even more interested in the game. It sounds like a lot of teamwork is involved with this event. I'm not sure if this group will be picking a time that's convenient for me, but I could always find another guild later. And from what I've read, it sounds like whaling won't really give guilds too much of an advantage. So this might be fun. 🙂
So far I think Snow White is the best looking character, so I'll probably use her for the Colosseum. I guess I have to choose a job for her. I'm leaning towards either cleric or minstrel. I like Snow White's look as a minstrel.
apps friends games social