Back to Dark Age of Camelot 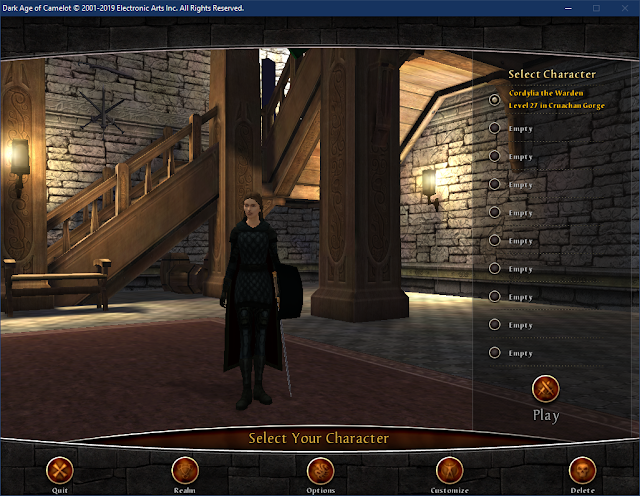 So I'm back to Dark Age of Camelot after all these years. 😀 It's still hard to believe that it's been nearly 16 years. I played with Constantyne and a couple other friends from Hallowed Crusaders during a couple gaming sessions already.
I have a Celtic Warden in Hibernia this time. I think I had tried out a Warden previously, but not sure that I made it to 50. It's a pretty versatile class, and I can help with healing.
Getting around to camps isn't so bad now. There are teleports to all the various locations. I'm not sure if this is just a feature added to the Phoenix server or if this is also in the Dark Age of Camelot live servers. There are apparently a lot of features added to Phoenix for convenience, like easy access to training. So really now this is about the same as it was in Dragon Raja to get around and hunt together. Still, since this is on the PC, I am somewhat limited in when I can play. But that's fine. This is just an experiment to see what things are like and to just play together with old friends. 😀
dragon.raja experiment friends games hallowed.crusaders