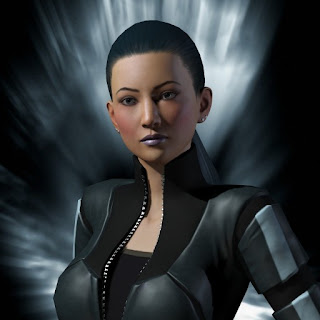 Constantyne was telling me about how our friend wanted to play EVE Online again. They previously played together with some other friends. I mentioned that I'd heard about a new game in beta called Starborne that seemed like the same type of space conquest game. However, Constantyne insisted that they were different. He explained that though EVE Online looked like a space conquest game, you only controlled one character using one ship at a time. You could be involved in epic space battles with other players, but you only had the one character and not multiple units.
Well, this intrigued me more. I asked more questions and Constantyne explained more of the game. It sounded like there was lots to do both solo and with others. He warned about the politics that could be involved with all the different player corporations, but you didn't necessarily have to get involved with that. There were plenty of other things to do. Players could play together in small battles and didn't have to join the big ones.
Then I started watching videos of the game and saw that the character creation actually looked surprisingly good. So then, of course, that means I had to try it out...
And so Whysper Kitsune was born after an hour of messing around with the character creator and half an hour coming up with the right surname. Haha. 😀 For those who don't know, "kitsune" means "fox" in Japanese. 🙂 I love my character. She looks so cool and confident. And I love how I can see her moving her face around on the in-game character sheet like she's alive.
I've been playing around in the game a bit. I like that I can do a lot of missions just on the side while doing other stuff. Space battles took a little getting use to, but I think I'm okay with them now. This might turn out better than Dark Age of Camelot for us to play together. We haven't been able to arrange a time for playing that recently. So with EVE Online, I can still do other stuff to build up my character on my own. It's new and interesting.
eve.online friends games hallowed.crusaders scifi social tech