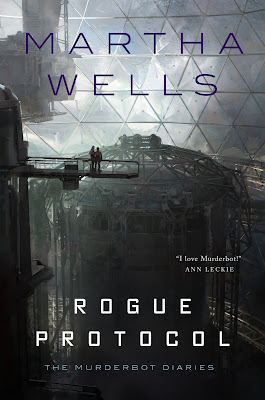 SPOILER ALERT!
This contains spoilers for The Murderbot Diaries.
Well, I managed to get through Rogue Protocol yesterday, the 3rd book of The Murderbot Diaries. I still think the 2nd book was the best, probably because of ART, but this one was pretty good too. Lots of Murderbot humor. Haha. 😀
I like the themes of artificial lifeforms like bots and constructs, which I think are basically any lifeform that is a combination of robotic and organic parts. And these include almost anything, like starships and construction vehicles and such, that have autonomy. It was interesting to see how disgusted the main character was with bots being treated as friendly pets or even friends. It still has an aversion to becoming too close to humans. I'm curious how things will turn out in the next book since it sounds like it will be returning home and will probably encounter his favorite human.
books murderbot scifi tech