Friend trying to recruit me in SINoALICE 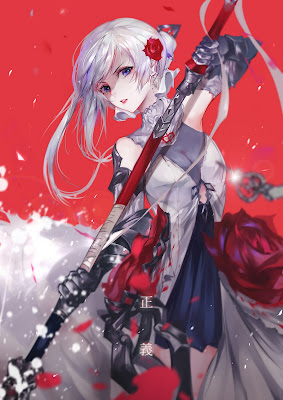 One of my friends from the SINdicates Discord server I originally joined is trying desperately to recruit me into his guild. Haha. 😀 That Discord server was suppose to be a group of SINoALICE guilds sharing the same server, but it broke down after some internal politics. A pity. So the guilds that survived went their own ways and started separate servers.
This friend named Mister (AKA Ghost) was someone knowledgeable about the game. He played the Japanese version and was giving me advice before the global release. He's nice and fine to chat with, but I don't consider him a close enough friend to abandon my current guild. I would feel very bad about leaving this SINcere guild. They've been a mostly good group to chat with and work together with.
Mister even said he'd move their Colosseum time slot for me. Haha. 😀 He insists that everyone would be fine with it because it was one of the two time slots they were considering. It's just one hour later than their current one. I'll admit that I was giving the idea some thought. I don't know why. Like I was saying, he's not that close of a friend really. But perhaps I just like the idea of being wanted? Hmmm, that certainly doesn't sound good, but I do think perhaps that's part of it.
games self sinoalice