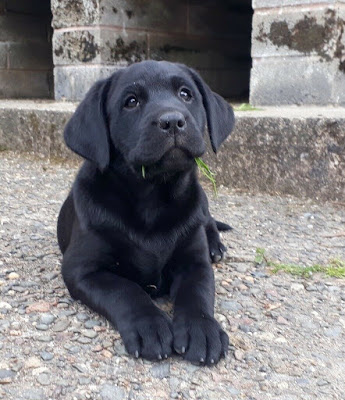 While driving my nieces to their schools this morning, I saw a black puppy wandering in the middle of the road. He looked somewhat like the one in the picture above. He looked so lost and confused. He had a bit of a limp. My heart just went out to him right away.
This was in a busy area around lots of shops, so at least the cars and scooters are paying extra attention for the unexpected. That's actually one of the advantages to the bad driving in Taiwan. People know that there are crazy drivers and that people often go through red lights and such, so drivers know they have to be careful and pay attention a bit more. With the mostly good driving in the US, I think some drivers get complacent and aren't ready for the unexpected. Haha, strange how that works out. 😀
Anyway, I later saw another black dog while driving, which made me think of that black puppy. Finally, after I had dropped off both nieces and was heading back, I stopped by somewhere to take care of an errand. And lo and behold, I see that black puppy again. He was still limping slightly. This was somewhat near the area I originally saw him. He must have wandered all the way there. He walked near me and I just had a strong temptation to pick him up and take him home. But I held back since I knew that would be silly. I don't know anything about taking care of a dog. And my girlfriend would be furious with me. Oh, how I hope that poor puppy is okay.
cute self