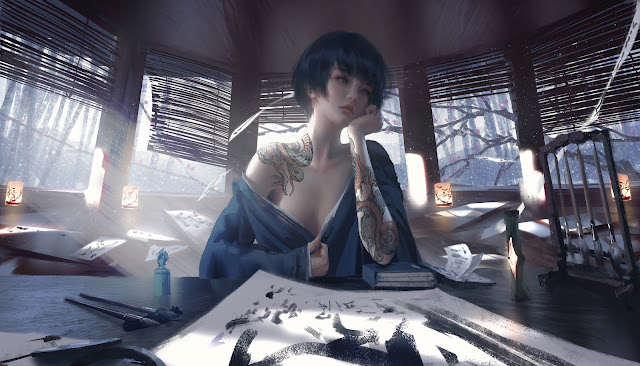 I've been avoiding so much for awhile now. Avoiding replying to people in many parts of my life. I've been depressed and just feel like cutting off all sorts of input to simplify my life. But this avoidance is not good. Oh, I'm such a horrible person sometimes.

It's just that many times I am just not sure what's the best thing to say or do, so I just avoid doing anything and hope the problem goes away. And sometimes it actually does resolve itself. But other times my guilt just keeps building up until it becomes more difficult to finally do anything at all. What do I say to a friend who I haven't said anything to for months and months? I can't just say I've been busy. Everyone gets busy, but you should still keep in touch.

When I was young, my family moved around a lot and I never kept in touch with old friends. So I was use to building up new lives every few years. But now the Internet makes it easier for people to keep in touch, yet I tend to not do so. I seem to be keeping my pattern of starting up new lives every once in awhile. True, I contacted my old friend Constantyne from my teen years. Yet that was an exception and kind of an experiment. I was looking to see if that brought back an old life I once enjoyed. But that's not exactly coming back like it was before. I knew it was impossible for things to be the same. So much has changed over the years.

Today I was lurking in the chat channels on the Discord server where the players for Forum of Lies hang out together. They were having such a blast together. I liked watching their fun, but I know I could never be part of that fully. Part of me wants to join them, and part of me is content with just watching on the sidelines.

Apparently I'm the oldest among them. Many of them are only teenagers in high school or college. What am I doing? Is it strange for me to want to hang out and play games with these young people? On the other hang, I'm like the youngest among my old friends from Hallowed Crusaders. I don't quite fit in with them either. But part of me likes not fitting in. I like being the outsider. the different one. What does that mean?